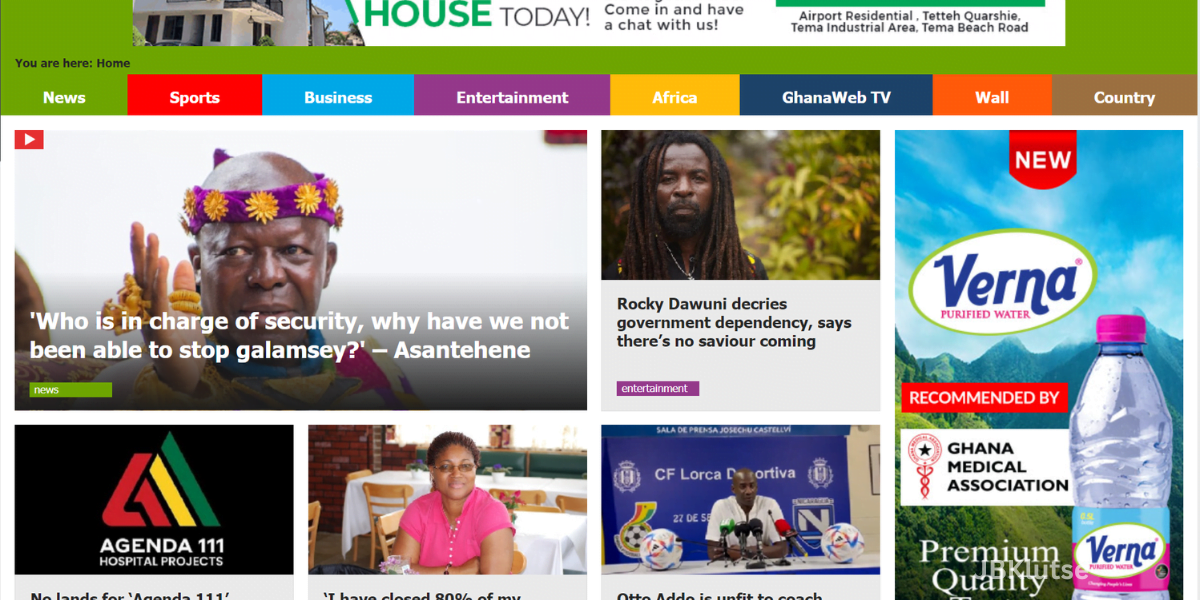 GhanaWeb is a vertical portal publishing everything related to the country Ghana. Aside news from Ghana, they offer background information, opinions, the facility to listen to over 200 Ghanaian radio stations, classifieds, videos, a social network for Ghanaians and many more.

The portal was launched by a privately owned company in 1999 and operates under the laws of the Netherlands. Through this legal setup, they publish news from Ghana in a completely independent and neutral manner. Also, they have established a platform where Ghanaians can express themselves freely through opinion articles and by commenting on the news without being censored. GhanaWeb is, however, a medium made for and by Ghanaians.

GhanaWeb is updated with original content out of Accra by a team of editors and journalists who work around the clock to ensure balanced and unbiased coverage of the news.

The wide range of different media (print and online) from which we aggregate ensures a balanced coverage of the news in Ghana. Our portal is constantly being improved and extended by Ghanaian web developers and web designers.

At a functional level, the portal is designed to meet the requirements of the 4 million unique visitors who patronise ghanaweb.com each month.

At a technical level, the portal is constructed to load smoothly and reliably even in remote parts of Africa.

Their visitors are predominantly Ghanaian. Historically, GhanaWeb has been very popular amongst the millions of migrant Ghanaians living in the USA, Canada, United Kingdom, Germany, Netherlands and many other countries. This segment of their audience is very loyal, in fact, many visitors from the early years still visit them daily.

GhanaWeb.com is rich in history that spans over two decades since its conception in 1994 as a print magazine serving the growing Ghanaian community in Amsterdam by collating news stories from Ghanaian newspapers.

The website was launched on January 1, 1999, as an amalgamation with GhanaHomePage – a blog on the domain of the University of Uta in Finland – which was conceived in the early nineties by a Ghanaian lecturer working in Finland.

GhanaWeb.com/GhanaHomePage featured links to the latest news, sports, announcements, chat rooms, Ghanaian dictionary and many other resources. News stories from Ghana were published from different sources and mailing lists from magazines.

On October 13, 1999, the website experienced a major update with a colourful interface designed by a Russian graphical top designer, setting a new standard in Ghana for ease of navigation to the comprehensive resource uploaded on the portal. Since then, the colour interface has become a trademark for GhanaWeb breaking away from the global trend of publishing content on dull and uninspiring websites.

Quite uniquely for the early years of the World Wide Web, GhanaWeb used a custom-built CMS (Content Management System), initially developed by the Dutch founder – a professional software engineer – which was specifically engineered for the African infrastructure conditions. Through the custom CMS, GhanaWeb has been loading very fast and reliable even on slow and unreliable African internet connections.

In 2001, GhanaWeb was the first African website offering a mobile website which was initially supporting feature phones such as the iconic Nokia 3110. Through this Wireless Application Protocol (WAP) site, GhanaWeb went mobile 6 years before the first iPhone hit the market.

The portal grew steadily with many people helping to update the website with daily news and information from Ghana. Notable journalists, bloggers and many columnists have gained popularity through their work and opinions on GhanaWeb.

By 2009, advertising revenues had improved drastically compared to the seven past years and more people were engaged remotely to update the website with news and information as it continued to lead the online news space in Ghana since its inception.

From 2011 onward, GhanaWeb launched a series of partnerships with local companies to run the editorial section of the business from Ghana while maintaining the legal entity as well as technical operations in Amsterdam to protect the rights of Ghanaians to express their opinions freely without government interference.

The GhanaWeb Newsroom has since grown into a strong backbone of the business despite its fair share of lawsuits in Europe based on stories published on the website. The setbacks haven’t changed GhanaWeb’s stance on maintaining independence and offering Ghanaians an objective and balanced news media platform that’s devoid of censorship.

2014 was the right time for the business to expand and it did with CameroonWeb.com. The portal was built on the same tenets of GhanaWeb with an element of bilingualism. CameroonWeb was published in both French and English when it was launched and journalists recruited in Cameroon managed the portal.

After two years, the market clearly swayed towards the French section of the website hence the need to collapse the English section to create the solely French CamerounWeb.com portal.

The portal has grown to become the most popular Cameroonian website ranked seventh after top sites like Google, YouTube etc. despite the Cameroonian government’s censorship and heavy attacks on the media. Its newsroom has been moved from the country to protect the journalists.

TanzaniaWeb was also born in 2017 publishing in Swahili. The country also faces censorship and the newsroom has equally been moved to a neighbouring country.

The expansion success of GhanaWeb necessitated the founding of AfricaWeb Holding which was incorporated in 2019 as AfricaWeb Publishing B.V. in the Netherlands.

It was created to help develop viable independent news portals, and web and publishing solutions in Africa. Under its wings is MyNigeria.com which was launched in October 2019 to serve the Nigerian population.

AfricaWeb Holding is building successful partnerships to help make the dream of creating robust online media in Africa a possibility. In 2021, the AW Free Foundation, which is an independent non-profit organisation, was founded by AfricaWeb to promote professional journalism, independent media and freedom of expression in Sub-Saharan Africa.

With operations in Ghana, Cameroon, Nigeria, Tanzania and Togo among others, the foundation uses technology, innovation and skills to support media under threat, and promote open technology and uncensored media tools and toolkits for journalists.

GhanaWeb has currently evolved from being a news aggregator website to becoming a producer of original content including video and digital content. It also has a mobile app that hosts the GhanaWeb Reporter which is a digital media sharing platform that gives citizen journalists and content creators direct access to publish a wide range of local content.

The GhanaWeb Reporter is among 21 projects from 13 countries in the Middle East, Turkey and Africa region to receive $1.93 million in funding to help journalism thrive in the digital age.

In the next five years, the media portals under the AfricaWeb Holding umbrella are expected to employ over 300 workers and reach 20 million unique visitors in a month. Indeed, the dream started with placing Ghana on the web, now it is Africa’s turn.