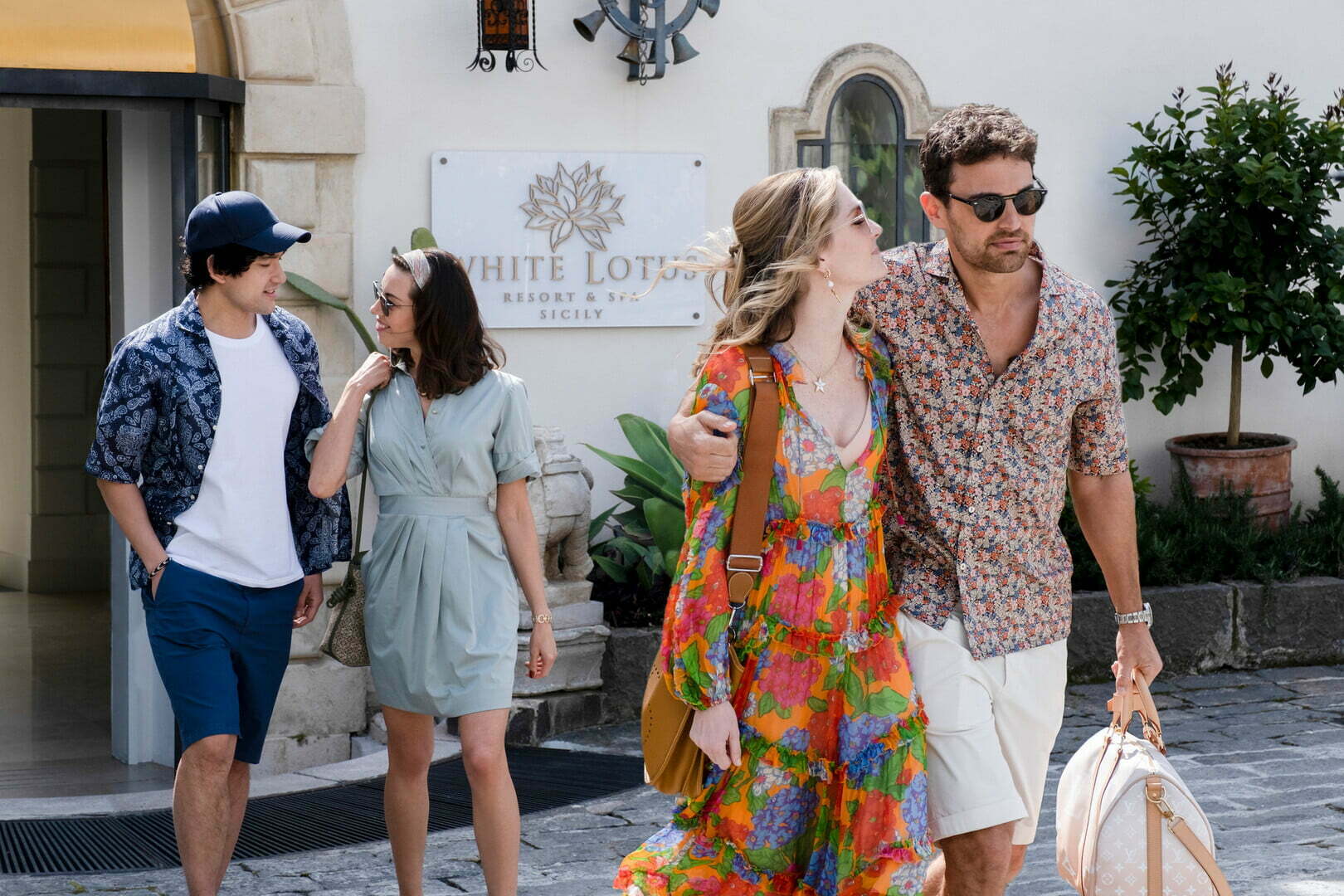 New seasons of The White Lotus, Hacks, 1st season of The Man Who Fell To Earth, The Real Housewives of Dubai, All American: Homecoming.

The next chapter of The White Lotus swaps Hawaii for Sicily, following a new group of vacationers jetting off to a different White Lotus resort.

Season 1 was the most awarded show at the 2022 Emmys, winning 10 awards, including Outstanding Limited or Anthology Series, Directing and Writing – and Supporting Actress for Jennifer Coolidge as Tanya, who returns in Season 2 opposite Teen Choice nominee Jon Gries (Napoleon Dynamite, Get Shorty) as Greg.

​​Season 2 has a 91% critics’ rating on Rotten Tomatoes: as Independent (UK) raves, “There is nothing more enjoyable to watch on television right now than The White Lotus.”

In September 2022, Jean Smart took home the Emmy for Outstanding Actress In A Comedy for the second year running for her performance as legendary Las Vegas comedian Deborah Vance. Hacks S2 also won Emmys for Outstanding Guest Actress (Laurie Metcalfe from The Big Bang Theory and Lady Bird), and Contemporary Costumes from its 17 nominations, which included Best Comedy.

Season 2 continues to explore the evolving mentorship between the acerbic Deborah and her young, entitled writer, Ava (Hannah Einbinder, nominated for back-to-back Emmys for this breakthrough role).

Season 2 has a 100% critics’ rating on Rotten Tomatoes, where it’s the fourth best-reviewed show of 2022 so far. IndieWire praised Hacks as “a series of endless wonders”; AV Club wrote that the new season is “pitch-perfect” starring “a never-better Jean Smart”; and The Wrap adds, it “remains one of the most consummately funny shows on TV.”

HBO Max has already renewed Hacks for a third season.

Adapted from the classic novel by Margaret Atwood, The Handmaid’s Tale is the story of life in the dystopia of Gilead, a totalitarian society in what was formerly the United States, where the few fertile women, known as Handmaids, struggle to survive as reproductive surrogates.

Having got her revenge in the Season 4 finale, June is facing its consequences in Season 5, while struggling to redefine her identity and purpose. The widowed Serena attempts to raise her profile in Toronto as Gilead’s influence creeps into Canada. Commander Lawrence works with Nick and Aunt Lydia as he tries to reform Gilead and rise in power. June, Luke and Moira fight Gilead from a distance as they continue their mission to save and reunite with Hannah.

The show’s 15 Emmy Awards include wins for Elisabeth Moss, Ann Dowd, Bradley Whitford, and Samira Wiley, with nominations for Yvonne Strahovski, Max Minghella, O-T Fagbenle, and Madeline Brewer, all of whom return for the new season.

Season 5 has an 81% critics’ rating on Rotten Tomatoes, with Variety writing, “The Handmaid’s Tale has found itself — or a version of itself, at once leaner and stranger — again… Handmaid’s is in a new, fascinating era.”

In The Man Who Fell To Earth, an alien arrives on Earth with a mission: to learn to become human and find the one woman who can help save his species. Together they discover that in order to save his world, they must first save ours.

One of Rotten Tomatoes’ most anticipated shows of 2022, The Man Who Fell To Earth was up for Best Special Visual Effects at the Emmys, while Oscar nominees Chiwetel Ejiofor and Naomie Harris were nominated for Best Actor and Actress respectively at the 2022 Black Reel Awards, where Clarke Peters was up for Best Supporting Actor. BAFTA winner Bill Nighy and Emmy nominees Jimmi Simpson (Westworld) and Rob Delaney (Catastrophe) co-star.

Based on the Walter Tevis novel of the same name and the iconic film that starred David Bowie, The Man Who Fell To Earth has an 87% critics’ rating on Rotten Tomatoes, with Salon praising Ejiofor in particular. “It’s an incredible performance bursting with tenderness, humour and the requisite level of oddity one would expect of a being thrust into an unfamiliar place.”

THE IPCRESS FILE (AKA HARRY PALMER) | Binge from 9 November 2022

As the Cold War rages, ex-smuggler-turned-reluctant-spy Harry Palmer (BAFTA nominee Joe Cole from Gangs of London) finds himself at the centre of a dangerous undercover mission to find a missing British nuclear scientist.

Based on the classic Len Deighton spy novel, The Ipcress File (aka Harry Palmer) has a 94% critics’ rating on Rotten Tomatoes, where the critics’ consensus says, “Slick, stylish, and packing sly nods to present politics, The Ipcress File is a classic spy caper with a modern sensibility.”

Super Pumped: The Battle For Uber tells the rollercoaster story of upstart transportation company Uber, embodying the highs and lows of Silicon Valley.

The season pivots on Travis Kalanick (two-time Emmy winner Joseph Gordon-Levitt from Inception), Uber’s hard-charging CEO, who was ultimately ousted in a boardroom coup, and his sometimes tumultuous relationship with his mentor Bill Gurley (Emmy winner Kyle Chandler from Super 8), the plainspoken, brilliant Texan venture capitalist who bets his sterling reputation on Uber’s success – and then has to live with the consequences.

Celine Buckens (Warrior, War Horse) was nominated for Best Supporting Actress at the 2022 BAFTAS and International Emmys as Talitha Campbell. She plays a wealthy entrepreneur’s arrogant daughter, who is arrested following the disappearance of fellow student Hannah Ellis, the hard-working daughter of a single mother.

From the makers of Vigil and Line of Duty, Showtrial switches between both sides of the legal battle, as defence and prosecution fight for their version of what really happened to Hannah, and the truth about Talitha: Falsely accused? Or callous murderer?

As Metro (UK) says, “By this point, it seems the makers of Line of Duty can do no wrong. The verdict on their intriguing legal thriller is in, and it’s another triumph.”

Oscar winner Adrien Brody was nominated for Best Actor: Horror at the 2022 Critics Choice Super Awards for his performance as Captain Charles Boone in Chapelwaite. The horror series is based on the short story Jerusalem’s Lot by Stephen King (It, The Shining, Carrie).

In the 1850s, Captain Charles Boone relocates his family to his ancestral home in the small, sleepy town of Preacher’s Corners in Maine. Here Charles will soon have to confront his family’s secrets and fight to end the darkness.

Nominated by both the American and Canadian Society of Cinematographers, Chapelwaite also stars multi-award winner Emily Hampshire (Schitt’s Creek) as Rebecca Morgan, while Jordan Poole was nominated for a Young Artist Academy Award as Emory Spicer.

Set in early 1990s New York, at the height of the crack cocaine epidemic, Wu-Tang: An American Saga is the fictionalised account of the formation of legendary hip-hop supergroup Wu-Tang Clan.

Nigerian-American Uyoata Udi (This is Us, Watchmen) takes over from Joey Bada$$ as Jason Hunter/Rebel/Inspectah Deck as the series explores the backstory behind some of Wu-Tang’s biggest tracks.

Created by Grammy nominated Wu-Tang leader RZA with Alex Tse (Watchmen), Season 1 of the series was nominated for an Emmy and three Black Reel Awards, including Outstanding Drama Series. The show has also already been renewed for a third and final season.

THE REAL HOUSEWIVES OF DUBAI | Binge from 25 November 2022

Move over Durban and Lagos: this new series of the popular international franchise The Real Housewives follows a powerful group of women in Dubai as they run business empires and expertly navigate a highly exclusive social scene within this ultra-luxe billionaire’s playground.

Whether they’re dining on a mountainside overlooking a valley of 1 000 camels or hosting the wedding event of the year, these ambitious and glamorous women prove everything is more extravagant in the City of Gold.

When new group dynamics threaten long-standing friendships, tensions inevitably reach a boiling point, so if you can’t handle the heat… get out of Dubai.

All American: Homecoming follows a young tennis hopeful from Beverly Hills and an elite baseball player from Chicago at a prestigious historically Black college. Here they must contend with the high stakes of college sports while navigating the highs, lows and sexiness of unsupervised early adulthood.

Created by Nigerian-American Nkechi Okoro, the young adult sports drama has a 100% critics’ rating on Rotten Tomatoes, with Variety calling it a “a big-hearted, worthy spinoff.”

EVERYTHING ON SHOWMAX IN NOVEMBER 2022

To see everything on Showmax in November 2022, including the Showmax Originals The Wife S3, Tali’s Joburg Diary and Donkerbos, click here.