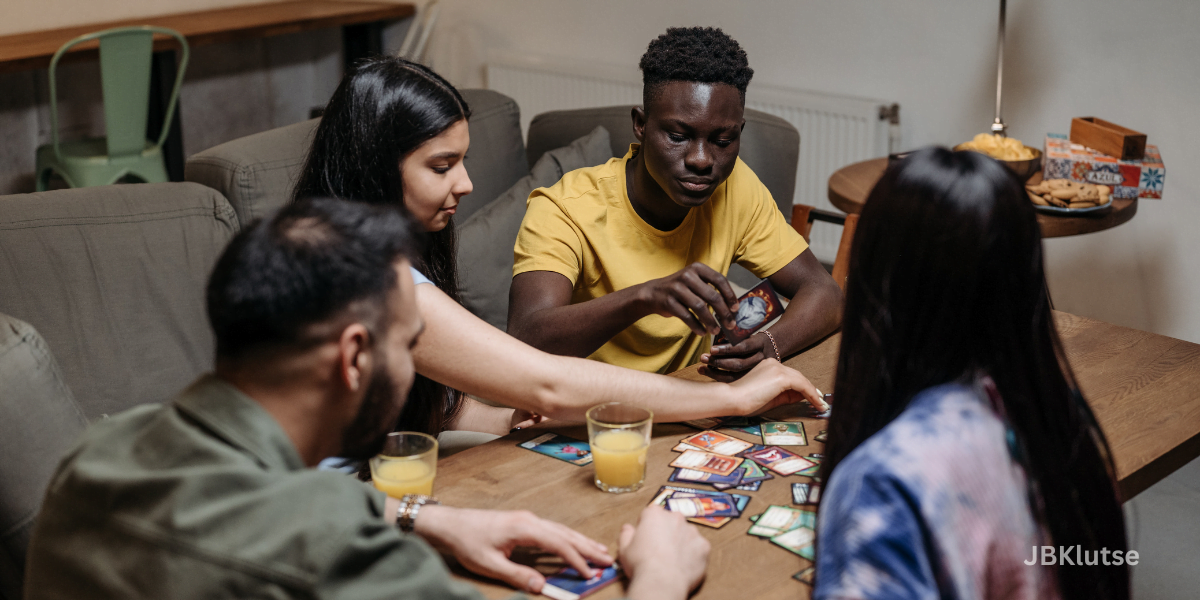 Playing cards with four players is an ideal situation for a large variety of card games. There are many popular games such as bridge, spades, hearts or rummy that can be played with four players, but sometimes players want to try something new. The following games are fun and easy to learn, but are less widely known than the more popular games like Online Casinos Ghana.

The object of this game is to achieve a score that is closest to or equal 31. To score, the cards must be of the same suit. Aces equal 11 points, K, Q, J & 10 equal 10 and all other cards are counted at their face value.

Before the start of a turn, if a player feels they have a hand that can be equal to or the greater than all other players’ cards after their next turn, that player “Knocks”. This ends the players turn (they do not pick up or discard) and the other players get one chance to pick up and discard. After everyone has gotten their one turn, all cards are displayed face up on the table and scores compared. Each player declares which suit is their point suit and totals up their cards according to that choice. The lowest scoring hand puts one of the lives into the center of the table. If the knocker is the lowest hand, he loses two lives. If there is a tie for the lowest hand, both players lose a life, unless one of them is the knocker; he wins the tie.

If a player reaches a score of 31 in their hand using cards of the same suit after picking up and discarding on his turn, he lays down his cards and is declared the winner. If this happens during a knock, the player is still the winner and the games ends.

If a player loses all of his lives in a game before a 31 scoring winner is declared, he is out of the game.

The Pig Card Game for Four People with No Stock Pile

There are many variations of this game, but to play with four players and no stock pile, the deck should be divided to include only the four aces, kings, queens and jacks. There should be four cards of equal value for each player playing, so if playing with five players, also include the 10s, if playing with six players, include the 9s and so forth. The cards are shuffled and dealt, four per player.

The play begins by all players removing one card from their hand and placing it, face down, to their left, then picking up the card that the player on their right has placed. This continues as quickly or slowly as the players wish, but no one can have more than four cards in their hand at any given moment.

Dub’s Bridge is an interesting and unique card game that can be played by groups of eight or more players. Seventeen hands are played during the game where, after every hand is played, trump cards change and players advance to other tables where they switch partners.

How to Set Up for Dub’s Bridge

Dub’s Bridge may be played by eight or more players but the number of players must be evenly divisible by four. Four people sit at each table with partners facing each other.

Each table needs a regular 52 card deck of playing cards but the four joker123 should be removed. Players cut the cards to determine who the dealer is. The dealer shuffles and deals the remaining 48 cards out to each player and the player sitting to the left of the dealer leads off.
Players may not lead off with trump cards unless they only have trump cards left in hand.

There is no bidding In Dub’s Bridge, there are no dummies and no honors are counted. Each trick won during any hand counts as ten points. Since twelve tricks may be won during the hand the maximum score during each hand is 120 points unless otherwise specified in the rules below.

The team which takes the most tricks at the table for that hand is the winner. The winning team moves on to the next table while the losers stay but each team changes partners for the next hand. In one version of Dub’s Bridge, winners of a hand at Table One stay at that table and retain their partners while the losers move to the last table; otherwise, it is the winners who move on to the next table.

While players work as a team, each player should have an individual score sheet on which they record their team’s score for each hand.

Dub’s Bridge ends after all seventeen hands have been played. The person with the highest individual score is the winner of Dub’s Bridge. In the event of a tie, the players are co-winners.