Intel Corp. said it plans to invest at least $20 billion in new chip-making capacity in Ohio, bolstering the company’s semiconductor-production ambitions as greater demand for digital products and a global chip shortage have amplified the need for more manufacturing.

Intel said Friday it would invest in two new chip factories just outside Columbus, Ohio, to add to Intel’s effort to expand its chip-making business. The company has made more than $100 billion in investment pledges over the past year. Intel Chief Executive Pat Gelsinger said the site could eventually grow to accommodate eight chip factories, also known as FABs, with spending potentially reaching around $100 billion over the next decade. 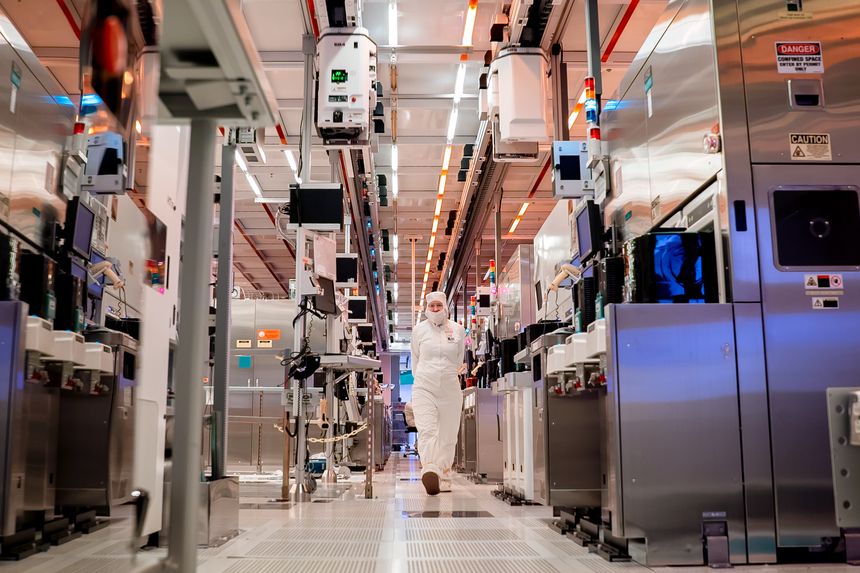 Intel will make some of its most cutting-edge processors at the new site, Mr Gelsinger said in an interview. Planning for the first two factories will start immediately, with construction expected to begin late in 2022, he said, and production is expected to come online in 2025. The company also pledged $100 million toward partnerships with educational institutions to build a pipeline of talent and bolster research programs in the region.

Mr Gelsinger said the semiconductor industry, which just topped $500 billion in combined annual sales, is expected to double by the end of the decade. “My intention as CEO is to grow our share of that growing market. So I have to be investing and expanding our capacity faster than doubling,” he said.

Mr Gelsinger said supply gaps could persist into next year and potentially even into 2024, though they show some signs of easing in the coming months. Intel shares closed unchanged at $52.04 in Friday trading amid a broader market decline.

The White House said early Friday that Intel’s investment plan augmented U.S. efforts to strengthen domestic chip-making. Governments, particularly in the U.S. and Europe, have become concerned with securing their semiconductor supply after years in which manufacturing has gravitated to lower-cost countries in Asia. The chip drought during the pandemic has only amplified those worries.

“The Covid-19 pandemic shined a spotlight on the fragility in the global semiconductor supply chain,” the White House said. The Intel facility is expected to create 3,000 permanent jobs at the new Ohio site, the company said. The project is expected to create an additional 7,000 construction jobs and tens of thousands of additional support jobs, it said. Time magazine earlier reported on Intel’s Ohio investment.

A combination of strong demand that industry officials expect to persist, the chip drought and governments’ willingness to offer subsidies to land semiconductor-production plants has triggered an investment spree among companies. Last year, Samsung said it would spend more than $205 billion over the next three years, with chip-making a priority, and unveiled a $17 billion investment in Taylor, Texas. Taiwan Semiconductor Manufacturing Co., the world’s biggest contract chipmaker, has said it would spend a record $100 billion over the next three years to increase production capacity. Other chip companies, such as memory-chip maker Micron Technology Inc. and Texas Instruments Inc., have also detailed fresh investment plans.

For Mr Gelsinger, the move is the latest step in his push to revive the company’s fortunes by restoring its position as a cutting-edge chip designer and becoming a leading chip manufacturer, including for other companies. In 2020, graphics chip maker Nvidia Corp. overtook Intel as the U.S.’s most valuable semiconductor company. Samsung Electronics Co. last year overtook Intel as the biggest chip maker by quarterly revenue. Analysts expect the South Korean company to hold on to that position when both report earnings next week.

Last year, Intel said it planned big investments in chip-making in Arizona and New Mexico and a roughly $95 billion commitment to European manufacturing.

Companies are reacting to the chip shortage, which has caused carmakers to idle plants and led to higher prices on some electronics. PC makers have enjoyed strong demand for their devices, but the scarcity of some components has weighed on shipments.

To land the chip plants and reduce the risk of future supply-chain disruptions on their domestic industries, the U.S. and European governments are devising massive subsidy packages. Congress has been working to pass legislation to support chip-company investments in the U.S.

Last year, the U.S. Senate approved $52 billion in funding to support semiconductor research and production, though the legislation needs to make its way through the House. The White House and Democrats are trying to revive momentum for passage of the legislation that includes the chip funding after it slowed amid partisan wrangling over some funding provisions.

President Biden, eager to show he is working to promote domestic chip production, highlighted Intel’s investment commitment at an event attended by Mr Gelsinger, calling attention to the jobs the factories would generate.

The White House is facing political pressure over supply-chain snags and inflation and Mr Biden outlined how chips are crucial to everything from vehicles to dishwashers. He called on Congress to pass the legislation with funding for domestic chip making, saying it is essential to keeping America’s edge.

“China is doing everything it can to take over the global market,” Mr Biden said. “So they can try to out-compete the rest of us and have a lot of applications, including military applications.”

The White House, citing industry data, said that since early last year, chip companies have announced nearly $80 billion in new investments in the U.S. that should unfold through 2025.

The Ohio location, Mr Gelsinger said, beat out roughly 40 other sites across the country to win the business. The region landed Intel’s investment, in part, by offering infrastructure upgrades, a massive space with room for expansion, and other incentives, he said.

“We will get a return on our investment,” he said. The state estimates Intel’s facility will add $2.8 billion to the annual gross state product.